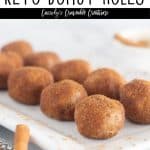 These Cinnamon No-Bake Keto Donut Holes are everything you dream they would be! Not only are they crazy easy to make, but they are sweet, cinnamony, and melt in your mouth.

As many of you know, no-bake treats such as these Keto No-Bake Brownie Bites and Chocolate Fat Bombs are my absolute favorite snacks and desserts!!! They are just so incredibly fast and easy to make and very portable for school lunches.

Many times when my kids get home from school they've already raided the fridge and aren't even hungry by the time I get a snack made!

But since these keto donut holes are made within 5 minutes, they're perfect for after school.

Also, I don't have to wait 15 minutes for them to bake before I know if they're good or not or how the texture turned out.

I'm like an evil scientist with my mixing bowl adding ingredients and tasting and adding... until I get them exactly perfect. Feel free to taste these as you go and adjust them to your liking and sweetness level.

Can I use butter instead of coconut oil?

You can use butter in place of coconut oil. When taste testing them side-by-side, though, my entire family preferred the coconut oil. Surprising right!?!

I thought for sure we would like the butter version better. But the coconut oil donut holes just had a better texture.

The ones made with butter were slightly softer and were lacking that bready texture if that makes any sense. Especially because they're not even baked!

Don't get me wrong, the butter version was good but the coconut oil version had more substance, texture, and they seem to just melt in your mouth more 🙂 Uhm, yeah I'll take that one thank you!!!

I hope you love them as much as we do. Let me know what you think in the comment section below 🙂

Looking for more recipes? You may like my Keto Peanut Butter Cookies,  Baked Paleo Donuts, or Gluten-Free Palate's Gluten-Free Donuts!

If you’ve tried these Cinnamon No-Bake Keto Donut Holes or any other recipe on the blog please let me know in the comments below! 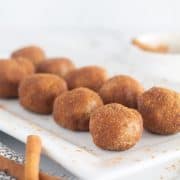 These Cinnamon No-Bake Keto Donut Holes are everything you dream they would be! Not only are they crazy easy to make, but they are sweet, cinnamony, and melt in your mouth.
4.94 from 16 votes
Print Pin SaveSaved!
Cuisine: American
Prep Time: 5 minutes
Total Time: 5 minutes
Servings: 10 donut holes
CALORIES :76kcal
CARBS :8g
FIBER :7g
Author: Cassidy Stauffer

Prevent your screen from going dark

Add You Own Notes

Nutritional information is approximate and may vary. Sugar alcohols are included in the total carbs and fiber.

Looking for more information on the keto diet? Check out my

Keto Resources
Subscribe To My YouTube Channel!Subscribe to my YouTube channel for full lenth recipe videos!!
Did You Try This Recipe?Mention @CassidysCraveableCreations so I can take a look!
« Sweet Paleo "Cornbread" Muffins
Vegan Pumpkin Smoothie {Low-Carb And Paleo} »
4.1K shares

Cassidy is a certified keto and intermittent fasting health coach and a mom of two teenagers, one of whom has autism and epilepsy. For the well-being of her family, she serves up easy, kid-approved recipes that are gluten-free and keto with many dairy-free and paleo options. She's passionate about creating healthy, allergy-friendly food that's just as good as the original!

Hi, I'm Cassidy! I'm a certified keto and intermittent fasting coach and am a mom of two teenagers, one of whom has autism and epilepsy. For the well-being of my family, I serve up easy, kid-approved recipes that are gluten-free and keto with many dairy-free and paleo options. I'm passionate about creating healthy, allergy-friendly food that's just as good as the original!